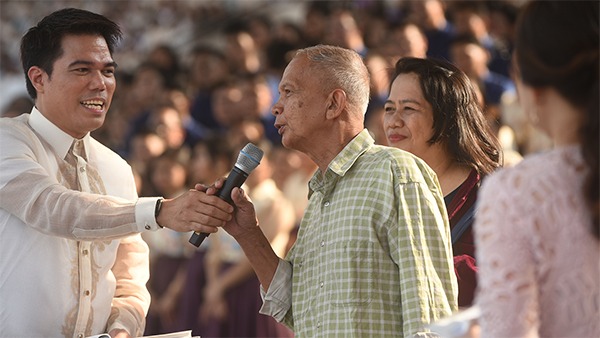 With his bronze complexion and lean, sturdy features, “Tatay” Abet Perez can truly be mistaken as a hardworking farmer.

Perez – who was chosen to represent the Jesus is Lord (JIL) Church members in the countryside in the JIL 40th Anniversary “Grand Homecoming” teaser – is actually a former overseas Filipino worker (OFW) who worked as plumber for 15 years in Dhahran, Saudi Arabia.

Both his parents, however, were both humble rice farmers in Bustos, Bulacan, and from whom he learned the values of hard work and sacrifice.

Why else would Perez venture to the “upside-down” oil-rich Middle East country to work and earn a living for his wife and five children?

It was while attending a secret Bible study (because such religious activities are banned in the country) at the barracks of his company where he was led to believing in Jesus Christ as both Lord and Savior.

When it was time for him to return to the country for good, his brethren encouraged Perez to remain faithful in his spiritual journey and endorsed the JIL Church to be his new Christian “home.”

“Maganda at masaya ang praise and worship sa JIL. Maganda rin ang mga katuruan,” said the former OFW, who is a member of the Security of the Saints (SOS) ministry of JIL Bustos, and whose two daugthers also serve in various ministries in their respective JIL chapters.

And while he may not have been a farm worker as his late parents, Tatay Abet has found a rich field to till in handling seven families as a Life Group Network in his local church.

Truly, the apple doesn’t fall far from the tree as Perez has become a productive JIL “farmer” : harvesting souls for the Kingdom of the Almighty God.