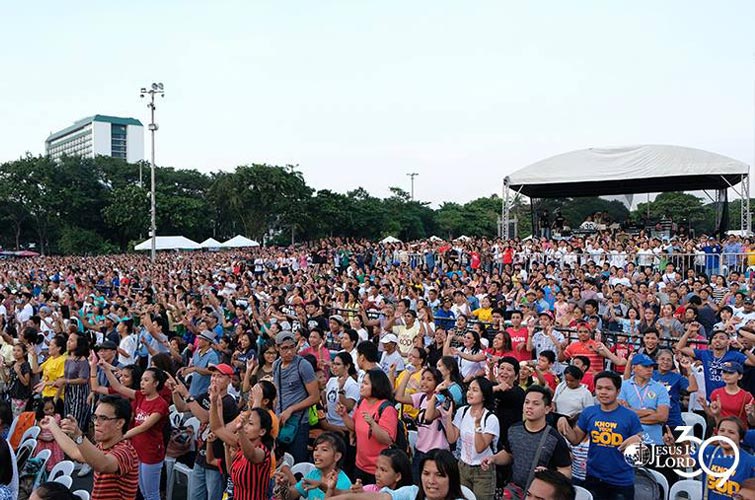 The anniversary of the Jesus is Lord (JIL) Church Worldwide always brings JIL people together. This is expected every year.

And yet, every year, there are unique testimonies that make each anniversary special.

Walking amid the JIL crowd from different cities, provinces, and even countries, one can just sense the overflowing joy of those gracing the event. It was glorious at the Rizal Park grassland!

JIL members went to Luneta to proclaim how the Lord made Himself known to them.

All the way from JIL Bocaue, Bulacan, the Barquilla Family made itself noticeable by bringing a very adorable pet dog! They came to Luneta early and were eating comfortably in the grassland while playing with their white puppy. The comely, little pup obviously brought happiness to the family members. Their intense passion to worship and thank the God they know made them bring a cute, little family member to the occasion!

Now this is heart-warming. Sis. Cresencia “Baby” Abucay from JIL Ampid in San Mateo, Rizal proved her willingness to join the JIL family celebration by bringing along her small grandchildren even though she was already old. To bring them all was indeed a great challenge!

When asked about the children’s parents, Lola Baby said that the parents entrusted them to her supervision when they left to work abroad.

What touches the heart was the way she looked at her grandchildren—full of love, care, and patience. Lola Baby’s love for them mirrors God as a very loving God to us.

She was picking up empty bottles under the scorching heat of sunlight. She was an elderly woman who managed to squeeze in some time to work while attending the anniversary. Her name is Salome Tan from JIL Bulacan. She’s been attending JIL anniversaries since 1984. Sis. Salome said that her faith is nurtured in the JIL Church. Though she may be experiencing financial crisis, she is thankful to God whom she knows as her Provider. She said she has faith that God would one day turn her situation upside down. She had the sweetest smile as she talked about her faith in Jesus.

Knowing God will indeed cause His people to express their love and adoration to Him in the most unique and special forms.